Do you know which card is the rarest in Magic the Gathering? There are six basic types of cards including lands, creatures, enchantments, artifacts, instants, and sorceries.

Depending the type and kind, the value of the MTG cards can significantly increase ranging from $2 to $35,000.

It is one of the MTG legendary cards that belongs to a card set known as a power nine. The set comprises powerful rare cards that were printed during the 1993-1994 MTG edition.

All the cards in the power nine collection are valuable when in good condition, but the Black Lotus is a Holy Grail amongst the cards.

The cards in the first edition of the MTG collection known as the Alpha set in 1993 are considered extremely valuable over the years, and they are worth thousands of dollars in the current market today.

The second set, known as the beta set, was printed in the same year in September, and also has valuable cards worth thousands of dollars.

If you are wondering if one of your cards are rare or not, we are going to share our tips to identify the rarest, and how to avoid fake ones. Answered below are frequently asked questions to help you learn where to purchase rare MTG cards and what are the rarest cards in play today.

How to identify rare Magic the Gathering cards?

Identification of a rare card in Magic the Gathering is based on the expansion set symbol and the price of the card.

Every card in the MTG set has its unique expansion symbol, which helps a player identify it as a rare card or a mythic rare card.

The color of a card symbol allows the player to tell the kind of rarity the card is.

In addition, foiled cards also have colored symbols from rarity derived from the non-foil version. Foil cards stand a chance for being valuable, therefore being commonly categorized as rare.

If a player still has a problem identifying rare cards, there are helpful websites with all the versions of any single card in the MTG that has ever been printed since the first edition. A good example is Magic Cards.

However, the card image sometimes does not match with the card displayed on the website. If such a scenario arises, note that the card belongs to a different edition, which probably has multiple sets of artwork.

The rarity of the MTG card also is identified by the price of the card. Rare cards in the market, such as Black lotus, are very valuable and worth thousands of dollars since the first edition to the current market.

Rare cards in the ethics of trading follow a rate of exchange that is very high. The player quotation is much higher because players are willing to bid for rare cards to an exaggerated level.

Are there fake Magic the Gathering cards?

Yes, there are a lot of fake Magic the Gathering cards in the market today. No MTG player would like to get duped into purchasing a fake Magic card, but players sometimes purchase counterfeit cards from the market for a purpose.

The player may decide to go for a fake card set to use them in gameplay.

In addition, fake cards are cheap, and therefore a player can buy them to save money. Original cards in the market whose price range is $50 to $500 have many counterfeits.

However, some players are genuine when paying for these cards, but they are not aware whether or not the cards are fake to begin with.

To tell if a magic card is fake, use shining LED light behind the card. When a LED light is passed behind the real magic card, they turn blue color at the center.

If the LED light doesn’t pass through a card, or the center doesn’t turn blue, then the card is fake. 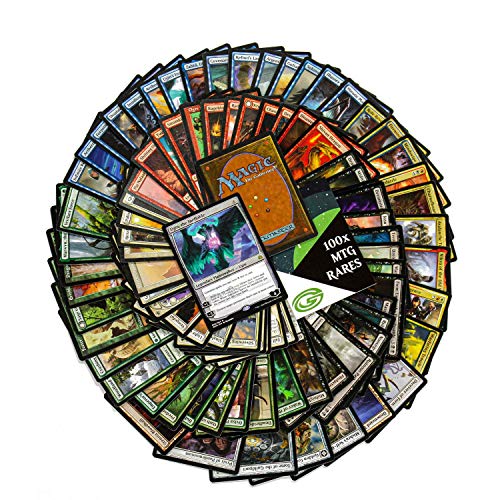 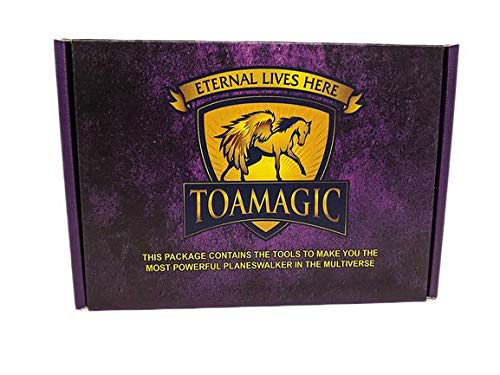 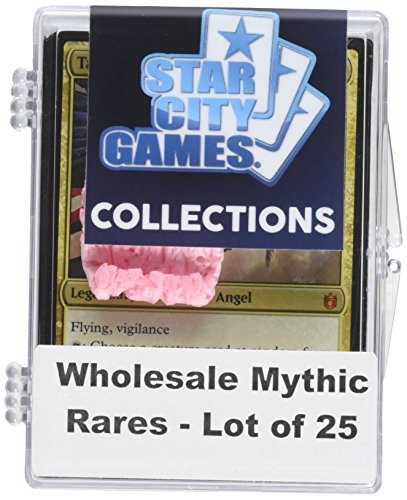 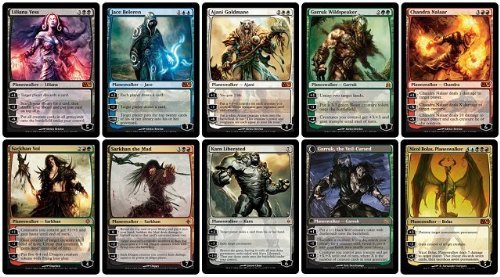 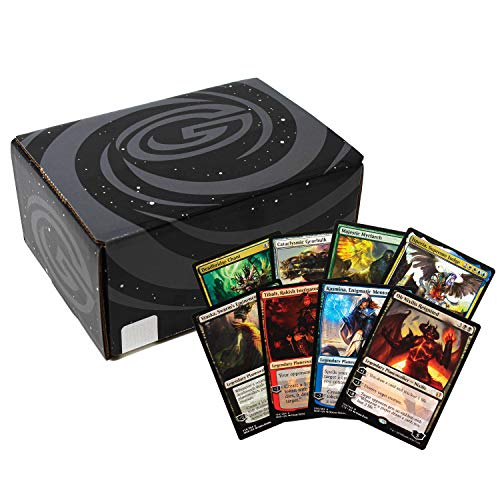 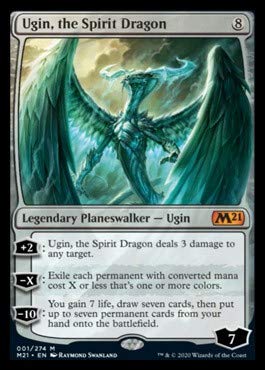 Spirit the Dragon is one of the most valuable MTG legendary available, Although its price dropped slightly from $26 in 2020 to $23 in 2021, it is still one of the most powerful card in a standard constructed deck, and the release of its STX will increase its value to $35. 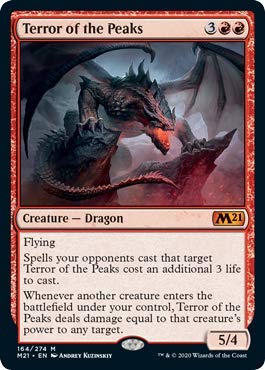 Terror of The Peaks

Terror peak found a space in standard format via 4C and still gets a slot in different KHM releases. In the M21 collection, the Dragon punishes opponents for choosing or removing the Terror of the peaks on the battlefield.

Terror of the Peak's current value prior to the release of STX is around $25. 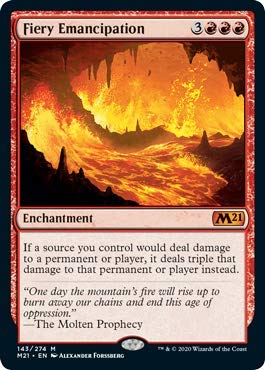 Fiery Emancipation serves as an enchantment that triples the size of damage from a source that a player controls and which controlled the damage in the first place. In the KHM release the value was about $15, but its value appreciated to $22 in the release of STX. 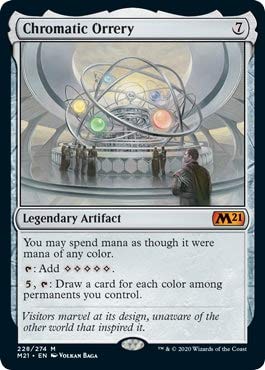 Chromatic Orrery is a colorless Artifact that adds five mana of any color in the battlefield and traps. It also gives mana the ability to draw a card of any color from permanent cards that the player controls. 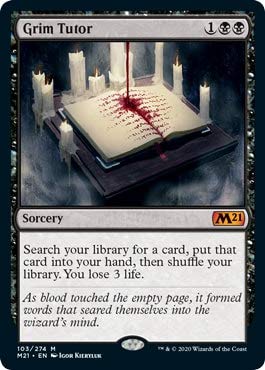 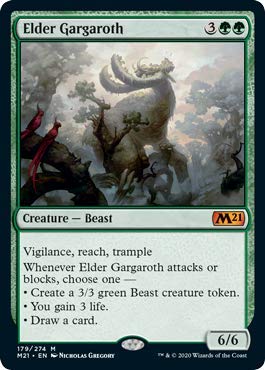 The Elder Gargaroth card value started at $10, but its value appreciated around $14 during the KHM launch. Its current value has increased to $16.50 by the release of STX. 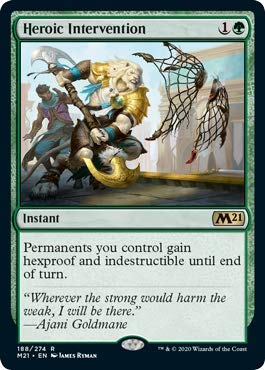 The Heroic intervention card plays in a mono-green deck with several commander's builds. Its value was $5, but at the start of 2021, its value increased to $12.50 before the release of STX.

The oldest and very first edition cards have the higher values. These rare cards in Magic the Gathering collection are the most valuable cards of any TCG, and they primarily belong to the initial editions of the MTG collection.

One of the most rarest MTG legendary cards is the Black Lotus, which was made and exposed to the market in 1993 as a first edition.

There are alpha and beta edition decks, and the alpha Black Lotus card is the most expensive one as well that the price peaks to $511,100. The beta edition is about $42,000, and was recent priced in an auction.

Rare cards are identified in two ways: the expansion set symbol on the card and the price that the card is purchased. Also, the color offers distinctive features to identify the rare and gold that indicate the rare category.

Be aware that there are many counterfeit cards out there. In order to identify the fake cards, simply hold the card in front of LED light and see if you can find a blue circle in the center or not.

Most MTG cards are sold in packs online and may contain rare cards. Understand how to spot rare MTG cards and which cards are the rarest in 2021 so that you can keep your collection growing to increase value over the years.